Dr. Anne McCloskey from Northern Ireland explains why the CoronaVirus Emperor has no clothes! People around the world will be gathering in cities on Saturday 20 March 2021, to Rally for Freedom and real democracy in the face of the totalitarianism forced upon us in recent times…

Protecting our Rights
Together we can bring an end to the distortion of the truth, coercion through fear and regain the autonomy and freedom achieved over centuries of struggle and sacrifice.

Responding to Tyranny
There are many thousands of people in this country and millions across the world who know that the ‘health crisis’, which began in March 2020, is a Trojan horse to introduce a supposed new era or order for humanity.

If the video does not load above, please watch here: https://
END_OF_DOCUMENT_TOKEN_TO_BE_REPLACED

While a lot of this left wing, migrant & Islamic funding comes from globalist Oligarchs like
END_OF_DOCUMENT_TOKEN_TO_BE_REPLACED

The Choice Is Tough Yet Clear: Globalist Money and Genocide or Your Family, People and Country

END_OF_DOCUMENT_TOKEN_TO_BE_REPLACED

BRexiteers and Yellow Vest protesters Have Shown UK Gov and EU Elites That If BRexit Doesn’t Happen, Amongst Others, There Will Be Civil War!

Elvis reports on a protest which blocked the Westminster Bridge for 20 minutes! They were asked by a Police escort for a ministerial entourage to let them through, and they said no! So the convoy had to go another route!

3,500 troops are to be put on the streets in case of a no deal BRexit, which Elvis feels is a good idea even though he suspects this army is actually to quell Brexiteers, because he knows bloodshed is coming. According to his experience in Iran, once you get the army out on the people, for whatever reason, it is game over and puts the whole unrest onto a new radical level…

Once an innocent is killed, revolution starts!

He feels many patriots and their movements are not taking the issue seriously enough for a revolution to come. There needs to be more coordination.
END_OF_DOCUMENT_TOKEN_TO_BE_REPLACED

France’s “yellow vest” movement demonstrated against alleged police violence in rallies across the country Saturday, as nearly 60 lawyers denounced the treatment of protesters in the courts.

The latest marches came a day after France’s top court threw out a bid to ban weapons that shoot 40-millimeter rubber projectiles blamed for a number of serious injuries.

Thousands of protesters took part in a “march of the injured” in Paris calling for a ban on the weapons.

One of the movement’s leading figures Jerome Rodriguez, who was hit in the eye at last Saturday’s demonstration, was greeted warmly by fellow demonstrators.

The marchers gathered for a rally at Place de la Republique in the city centre, where police used tear gas and water cannons to force demonstrators to keep their distance and clashes broke out with some protesters, some hooded or masked.

A police estimate put the turn-out at 10,500 in Paris, but an independent count carried out for the media,
END_OF_DOCUMENT_TOKEN_TO_BE_REPLACED 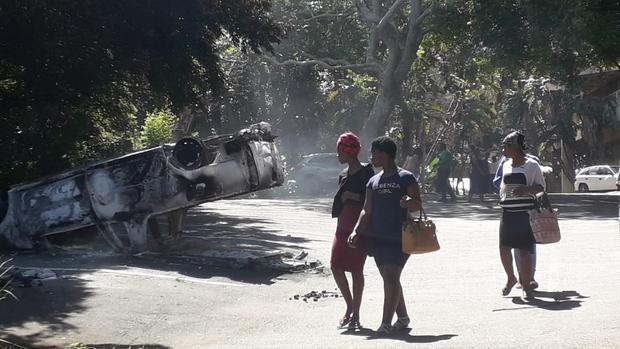 Out of those injured, 100 have been seriously hurt and 11 people have now died. Most of those casualties resulted from road accidents at blockades in the early days of the
END_OF_DOCUMENT_TOKEN_TO_BE_REPLACED

Matteo Salvini, Italy’s opinionated deputy PM, said that he hopes the French people can rid themselves of the “terrible” leadership of President Emmanuel Macron. Salvini’s jibe is the latest salvo in an ongoing feud with Paris. “I hope that the French will be able to free themselves from a terrible president,” the populist leader said..
END_OF_DOCUMENT_TOKEN_TO_BE_REPLACED

A 28-year-old Frenchman has been sentenced to six months in jail after he published a Facebook post attempting to organize a ‘Yellow Vest’ blockade of a local petrol refinery, according to local reports.

Hedi Martin was arrested in Port-La Nouvelle, southern France on January 3, shortly after publishing the post on Facebook, la Dépêche reports. In his post, Martin called for a ‘Yellow Vest’ blockade of the petrol refinery in the coastal town, urging people to “stand up to the CRS [riot police],” according to WSWS.

State prosecutors noted video footage of Martin on his Facebook page at several Yellow Vest protests in the region, and criticized him for allegedly resigning from his short-term contract at a chocolate factory to “spend between four and seven hours every day” demonstrating.

The state prosecutor had reportedly sought a harsher penalty of two years imprisonment and a three-year protesting ban. However, the fact that Martin had not ac
END_OF_DOCUMENT_TOKEN_TO_BE_REPLACED

Yellow Vest protesters are hoping to trigger a bank run with a nationwide coordinated cash withdrawal. By threatening the French financial system, protesters say, they want to peacefully force the government to pass their reforms.

Police have deployed water cannon during a rally against the controversial UN migration pact in Brussels. Officers were seen scuffling with protesters, who threw firecrackers before facing off with law-enforcement.

The rally was dubbed the ‘March against Marrakech’ in reference to the city where the pact was signed earlier in December. It was organized by the right-wing Vlaams Belang party which has long been a vocal opponent of the agreement.
END_OF_DOCUMENT_TOKEN_TO_BE_REPLACED