Where will YOU run to once globalism has destroyed your homeland? Even Jews are even fleeing from South Africa! Is it time to stand and fight?

Edited highlights of a mini documentary released by Katie Hopkins, showing how Jews finally have a proper homeland of their own, to be safe in and preserve and protect their culture history, language and heritage, yet whites, who hosted them in the diaspora for so many centuries, have mostly lost control of their own homelands. Rabbi Chaim Klein tells Katie directly that whites are in Big trouble and that jews are much more safer than whites!

The liberal driven islamification and africanisation of white countries has created a genocidal dystopian environment for millions of white’s in their own Homelands as muslims and africans flood their countries.

If the video does not load above, watch here: https://youtu.be/zuELI-xClKs 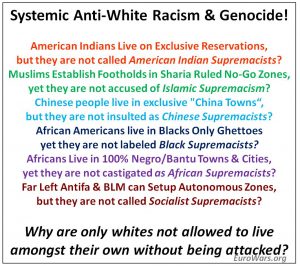