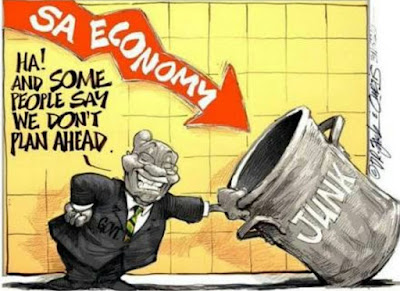 “Junk Status”…the first step to being an economic basket case like Zimbabwe…or a Communist Utopia…depending on how you look at it.

23 Years…What took the ANC so long? I am extremely disappointed in them and I am sure the SACP too. I honestly thought they would reach this status far quicker. I mean…it is the plan after all. It is the Communist agenda for South Africa. For a while it was behind schedule, but now it is firmly back on track.

The achievement of “Junk status” and the resulting chaos from it might sound like a catastrophe or a major disaster to most South Africans, but in the minds and hearts of the Communists, it is a blessing. Their faithful lapdog, Jacob Zuma, has done well.

Polokwane 2007 was the watershed moment for South Africa. There it was decided to take South Africa to the Left and down the drain. Shortly after that, those whose last hopes for SA were smashed, emigrated.

Up until 2007 Mbeki thought he could play both sides…He wanted to appease the Capitalist West and the Communists in South Africa at the same time. He thought he could keep both sides happy. His dream of an “The African Renaissance” that he strategized as the New Partnership for Africa’s Development (NEPAD)was doomed from the start.

The Communists want South Africa to be thoroughly Communist and in order to do so a certain pattern should be followed according to Karl Marx; the Capitalist system must be destroyed. They want the confiscation and the collectivization of property. The country must be economically ruined. People must starve to death. A bloody revolution with the streets flowing with blood must follow. Only then can a new Communist dawn break over South Africa. Only then can they walk through the ruins of South Africa and feel themselves equal to God.

The Communists have never and will never relinquish this plan.

Therefore I have to chuckle when people believe the junk that The SACP did not support Zuma’s decision to fire Finance Minister Pravin Gordhan and replace him with Malusi Gigaba. It is all according to plan.

First of all…Why do people love Pravin Gordhan so much? He is a Communist bloodsucker who taxed South Africans to death so that his buddy Zuma could steal the money together with his Indian friends, the Guptas.

Pravin Gordhan is a Communist that went rogue. He allowed himself to be corrupted by the “White Monopoly Capital”. He betrayed the 2007 Polokwane plan of the Communist goal for South Africa. He was replaced by a more loyal Communist Malusi Gigaba who joined the SACP in 1990 and is one of the Communist brains behind Zuma.

Ask yourself, “Who can fire Zuma?”

The answer is: The Communist ANC top structure. They can recall Zuma today if they want to. Why aren’t they? The reason why Zuma feels so secure is because he knows he has the full backing of the Communists. The Communists love Zuma. He is doing exactly what they want and when they are finished with him, they will discard him and replace him with a new Communist Puppet. For the Moment Zuma is doing exactly what the SACP wants for South Africa…Rapid Radical Economic Transformation.

The ones who were apparently against Zuma’s decision were ANC secretary general, Gwede Mantashe, Deputy President Cyril Ramphosa and Mr. Third Force himself…ANC treasury, Zweli Mkhize (the mass murdering and thoroughly corrupt bastard responsible for thousands of Inkatha political murders during the 1980’s).

Ironically, the two women…Baleka Mbete and Deputy Secretary General of the ANC, Jessie Duarte are said to support the rapist Zuma. Baleka Mbete is Speaker of the Parliament, but a fraudster who is driving around with a fraudulent license because she reckons she is too busy to stand in queues. She also chartered a plane to Liberia for herself and her secretary (just the two of them) at the tune of $60,000 (half a million rand) and is in love with other fraudsters such as Tony Yengeni and assassinated Brett Kebble.

Jessie Duarte is of course the idiot who called Israelis “Nazis”.

Nevertheless… Consequences of Junk Status are that with no economic and political stability there will be no new investments and there will be no new jobs. South Africans will get poorer, Inflation will rise, the currency will fall…Boy, does the ANC have a “good story to tell”.

Imagine waking up in the morning and having to look yourself in the mirror, knowing that it is YOU who are the cause of the ruin of South Africa and having to admit to yourself that you were a Communist useful idiot, that you were wrong and the “rightwing racists” were right.

We said the ANC could not run the country. Criminal scum we said they were. We said they would ruin South Africa; steal it into poverty. You cannot reason with Communists we said…”Racists” they called us.

Back in 2007 when Zuma was elected ANC President, I was furious and I spelt out my dismay in several articles.

What I was most upset about was that my own people, white Afrikaans South Africans such as Flip Buys, Kallie Kriel, Dr Dan Roodt, etc were falling over their feet to go and kiss Zuma’s arse. They had BBQ’s with him and honestly believed that they could talk to him. Their words to me were, “At least Zuma is someone we can talk to. Zuma listens to us.”

In my disgust I cried out to heaven…”Oh when are my people going to wake up and learn?”

At the time I was the lone voice who wrote in an article after Mbeki was replaced by Zuma…“Bad just got worse”…everyone waxed lyrical about the “wonderful” Zuma. Mike Smith: It was just time for a change

I was viciously attacked on “Global Politician” by the illustrious liberal idiot and Zuma apologist, Dr. Johann Wingard after my articles in which I told the truth about Zuma, Mike Smith: On trapping birds and kicking dogs and Negotiations with the ANC and Appeasement – The long term strategy for Afrikaners by their own leaders

BTW…Dr. Wingard was Chairman of the “The Volkstaat Council” which was an organisation of 20 prominent Afrikaners including Solidarity’s Flip Buys and the Recce Commandant Douw Steyn (think failed Bophuthatswana invasion) , created by the South African government, via the Volkstaat Council Act in 1994.

Tja…Not a single inch closer to a Volkstaat today, are we?

Paid by the government to look busy for five years and did absolutely NOTHING. “Fucking useless” are the words drifting past my brain every time I think back to the “Volkstaat Council”.

Here is the truth…The ANC idiots are not going to do ANYTHING to get rid of Zuma. Neither are the Afrikaner Intelligentsia.

If you want to get rid of Zuma and get a Volkstaat, you have to go for the head of the snake. You need to get rid of the Communist scum backing him. Only then can you reverse the 2007 Polokwane decision to turn South Africa into a Communist Hellhole. Everything else is futile. You are hacking away at the branches when you should be going for the roots. For the hundredth time…you cannot reason with a Communist. The only thing you can do is put him up against a wall and put a bullet through his brain.

By:  Mike Smith
4 April 2017
Share this article with friends: